The last weeks (and months?) there has been a debate about terminology when we talk about risky play and children’s risk-taking. I would like to share my view on this issue.

First of all, I would not criticize anyone who use other terms than I have chosen to use when I write about my research, talk to parents or ECEC practitioners, politicians or other stake holders. My aim is to explain why I am not afraid of using the “risk-word” and why I think it is the most appropriate to use – in my context.

Recent blogs have suggested that we stop using risk and instead talk about adventure/adventurous play or challenge/challenging play.

I think these are interesting reads, but I can’t say I agree with everything.

I think maybe the (seemingly) disagreement about terminology might be a result of different cultures and languages. In Norway we have no problem using the concept risky play (in Norwegian “risikofylt lek”) in our common language. It is even mentioned in some of the policy documents about Norwegian child care, and it is a concept used by both the Ministry of Education, politicians, public health professionals, injury prevention professionals, teachers, insurance workers, parents, grandparents, etc. etc.  And, it is not used as something completely negative – it has both a positive and a (possible) negative side. In the Norwegian daily vocabulary synonyms for risk(y) are both words such as danger, loss and threat, but also words such as responsibility, take a chance, to dare something, courage, opportunity, change etc.

So why don’t we use adventurous or challenging? In fact, we can’t translate “adventurous” directly from English to Norwegian because we don’t have a good word for that in the Norwegian language. Often adventurous is translated as “eventyrlig” which translated directly (word by word) back to English would be “fairy tale’ish” – which means something like “so good it could not be for real, just like in a fairy tale”… The reason for this is maybe that an “adventurer” is an “eventyrer” in Norwegian (like someone living out his/her dream exploring new and exciting things – just like some of the characters in a fairy tale). Adventure and adventurous is, in the Norwegian context, more connected to the wild-life tourism/business or the great Norwegian history of explorers – not to children’s play. It would not make sense in the Norwegian language to use “adventurous” because it would be a very odd word with no good meaning in relation to children’s play. It is the same in the Danish language, and “adventure playgrounds”, that Lady Allen called them, was originally called “skrammellegeplads” in Danish (e.g. Emdrup) which means junk playground… I have also argued against replacing the word risk or risky play with “challenge/challenging play” (in Norwegian “utfordrende lek) to softening it and make it sound less dramatic. In an educational context, at least, the word challenge could mean many things, and sometimes things far from what we want to address when using risk – for instance a cognitive difficult learning situation/-task. Therefore I also think “challenging play” is too inaccurate to make our point. And I very much agree with Teacher Tom in Seattle on his thoughts about this: http://teachertomsblog.blogspot.no/2016/06/everything-i-need-to-say.html

So instead risky is the concept that makes people, at least in Norway, understand what we are really meaning when we talk about it. Risky play and risk-taking have both positive and negative associations, and I don’t think we should cover what we mean with softer words to make it JUST positive (and more acceptable for some groups). For me it’s actually an important point that the meaning of the term ALSO includes the possibility of a negative outcome – since the fear of this outcome is the reason we have all the restrictions and surplus safety in the first place. Our very clear message should be that children’s risky play (yes, risk (!) but in a playful and relatively safe context) most often leads to positive outcomes; exciting experiences, development, learning, mastery….etc.

I am comfortable with using risky play (a noun), risk-taking in play (a verb), children taking risks etc. But I still stick to the word risk. I would say that people in any culture might want to use the word best suited for them to communicate what they want to communicate as long as they are conscious about what they gain or miss by using what they are using.

What I am a bit worried about is that through this discussion about terminology, people and academics who (I believe) basically agree on this important issue (whatever you call it), are put up against each other, and that we soon look like we don’t agree anymore…

I don’t think that would be good for our “case” in the long run, unfortunately.

Maybe this blog post is risky play, but I’ll take the risk…

I have published a new article together with my colleague Ole Johan Sando. It draws a rather negative picture of the development towards a more safety focused an restrictive perception of children’s play in Norwegian early childhood education and care institutions. This is what we are fighting against here in Norway. At the moment it is just a tendency, but we don’t want it to dominate the provision of play in our country!!

Together with my colleague Monica Seland I have just published an article from the Children’s well-being and participation project. This article focuses on how their exeriences of activities and opportunity for participation in the ECEC daily life are related to their subjective well-being.

(click the picture to see where it can be found) 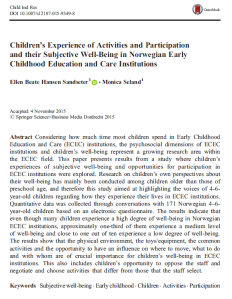 During the fall I have been involved as a consultant on this very interesting report. For all of you who reads Norwegian, and are interested in how to make good transitions for children between ECEC and school I recommend downloading the report! 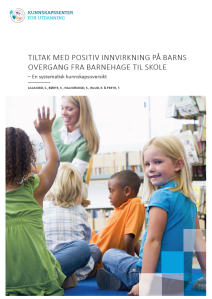 It is a part of the Canadian Report Card of this year!

The Position Statement is based in our work on two systematic reviews published in these two articles:

What is the Relationship between Risky Outdoor Play and Health in Children? A Systematic Review

What Is the Relationship between Outdoor Time and Physical Activity, Sedentary Behaviour, and Physical Fitness in Children? A Systematic Review

This has been such an interesting collaboration for a foreigner like me in a Canadian context, – thanks to all my collaborators!

I am happy share with your the news about a new article that I have published together with my colleague Rune Storli. We have written about how Norwegian preschool teachers perceive children’s rough-and-tumble play in both indoor and outdoor environments.

Here is the abstract:

This paper explores teacher-reported prevalence of rough-and-tumble play (R&T) in preschool and investigates how their restriction to such play varies in different play environments (indoor and outdoor). An electronic questionnaire exploring preschool teachers’ beliefs and practices regarding children’s dramatic play themes was conducted by 138 female Norwegian preschool teachers. The results show that the teacher-reported prevalence of nurture/care and house/family types of dramatic play is higher among girls than among boys, while superhero play, pretend fighting, chase games and protect/rescue play is more prevalent among boys than girls. The results also show that play-fighting and chase games are the dramatic play types most restricted by the preschool teachers, and that R&T play is significantly less restricted in outdoor environments compared to indoors. The results are discussed within a Norwegian early childhood education and care (ECEC) context and implications for ECEC practice are suggested.

I was positively surprised to receive a notice telling me that one of my articles was one of the most read within Routledge’s Education Journals during last year. Have a look at my article and other most-read-articles here:

http://explore.tandfonline.com/content/ed/class-of-2015/early-years-primary-and-elementary-education-2015
Have a nice day

Today I will share a brief magazine article in the American Scouting Magazine that comments on my research (they have interviewed me).

I hope the scouting movement will still be able to offer risky play for children for many, many years!

Have a nice and playful day!

I want to call your attention to a recently published collection of papers that I have been part of writing. I was lucky to be invited to a symposium about risky play and children’s development that was held prior to the November 2013 Canadian Injury Prevention and Safety Promotion Conference in Montreal. As a result of this seminar the participants decided to write a paper accompanied by several short papers and see of we had any luck being published in an injury prevention academic journal. I am happy to share the final published paper with you all. I hope you find the content both inspiring and provoking! Make sure to click on the link “Supplementary data” on the right side of the web-page to access the short papers as well!

One of my really delightful teaching appointments is being a lecturer for international students visiting Queen Maud University College (QMUC) for five months. They are enrolled in a course called Outdoor Play and Learning in Norwegian Early Childhood Education (see study plan), and 10 ECTS of this study is the module Risky Play and Outdoor Life in ECEC settings. I teach this module together with my colleague, Trond Løge Hagen, and we try to do most of the teaching at QMUC’s farm, Frøset Farm, up in Trondheim city’s forest. We have recently had two long and wonderful days at Frøset Farm that I want to share with you all:

Day 1: Outdoor life – we first watched the price winning film Play Again about how today’s children are about to loose their close contact and ownership to nature, and then we discussed its content in the context of different cultures and traditions (Norwegian and the different countries from which the students come from). Then we prepared lunch over open fire outdoors and had further discussions. The last part of the day we taught the students how to build a nature playground with simple materials such as sisal ropes and branches.

Day 2: Risky play – we first watched the very thought provoking film The Lost Adventure of Childhood, and then discussed the pros and cons of children’s free play in general and risky play particularly, linking it to cultural differences and recent changes in the western society. Then the students all by themselves made a fire outdoors and prepared lunch. It was a cold day, and since we brought skates for everyone (from the storage at QMUC), we tested the somewhat risky ice at the lake Store Leirsjø (we had ropes and ski poles as safety). Great day! 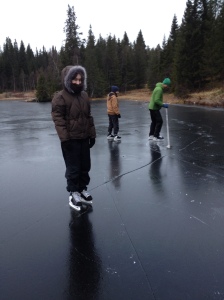 I love my work!

Welcome to all international students out there who would like to join us! 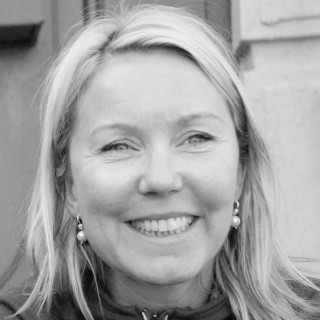